A Brief History of Moorcroft Pottery

William Moorcroft was employed by Staffordshire pottery manufacturers James Macintyre & Co. Ltd. as a designer in 1897, and after a year he was responsible for the company’s art pottery studio.

William Moorcroft created designs for the Macintyre’s Aurelian Ware range of high-Victorian pottery, which had transfer-printed and enamelled decoration in bold red, blue and gold colours. He also developed the art nouveau-influenced Florian Ware which was decorated entirely by hand, with the design outlined in trailed slip using a technique known as tubelining. William Moorcroft’s designs won him a gold medal at the St. Louis International Exhibition in 1904.

Each piece of pottery produced was personalised with Moorcroft’s own signature or initials.

William Moorcroft and James Macintyre & Co. Ltd. split up in 1913 and Moorcroft founded his own factory nearby. Some finance came from the famous London store Liberty, and Liberty continued to exercise control over Moorcroft until 1962.

Moorcroft’s reputation was further enhanced with the appointment of the Moorcroft company as Potter to HM The Queen in 1928. On the death of William Moorcroft in 1945, his elder son, Walter, took over management and design and he continued in this position until his retirement in 1987, after which he continued contributing to Moorcroft designs.

During the tenure of Walter Moorcroft, the Liberty store’s interest in Moorcroft was purchased by Moorcroft in 1962.

In the 1980s Moorcroft got into financial difficulties as a result of rising wages and fuel, which were exacerbated by the labour intensive techniques employed by Moorcroft and the company went through several changes in ownership with the result that from 1993 the company was controlled by the Edwards family, which is still the case.

The young 24 year old designer Rachel Bishop joined Moorcroft in 1993, as only its fourth designer in almost a hundred years and her designs become immediately popular. In 1997 the Moorcroft Design Studio was formed with eight designers, and with Rachel Bishop as head designer.

Moorcroft celebrated its centenary in 1997, marking the year that William Moorcroft joined MacIntyre as its founding date, rather than the year the company was founded.

Moorcroft is still producing art pottery in it’s own distinctive design style, and with astute promotion and limited edition designs, is selling more than it did in the mid-1920’s, its previous heyday. 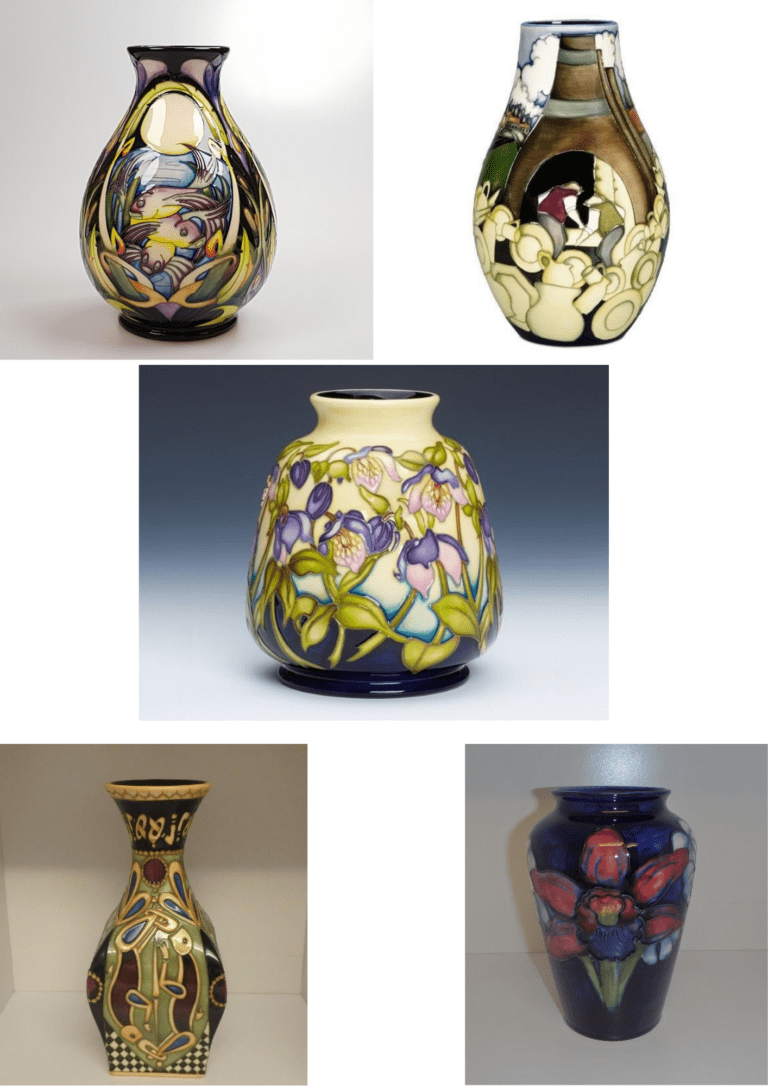